Is Australian Cattle Dog German Shepherd Mix For Me?

Australian cattle dog and German Shepherd mix dog is a good fit for people that are active and have had experience in handling dogs before. These dogs are suitable for families with kids above 7 years of age and are friendly with old-aged members.

Like every other mixed breed, the Blue heeler German Shepherd mix may inherit traits from both parents. They might have the appearance of a German Shepherd or an Australian Cattle Dog or a blend of the two.

Both dog breeds have multiple coats on their bodies. The Australian Cattle Dogs have a short-length coat, whereas the German Shepherds have medium-length coats. The Cattle dog German Shepherd mix can have any coat type.

They have a tall, wide head and a thin face. Both its parent breed usually have erect ears. The parent breeds’ coats could only be distinct. This German Shepherd cattle dog mix comes in a broad range of color combinations. The Australian Cattle’s blue scattered appearance, coupled with the German Shepherd’s dark and brown coloring, may assume different colors. The offspring’s color, on the other hand, would be a mix of the Cattle’s “blue” tint and Shepherd’s brownish color.

Like their parent species, this crossbreed has a powerful, muscular physique. Because both parent breeds are service dogs, their children will be smaller and have wide shoulders. In most cases this dog breed becomes a great therapy and service dog, but in the case of Ryker he had a bit of too much of a personality. You should watch it! The story is actually quite unique and funny!

As a result, the Australian cattle dog and German Shepherd mix should be in the center of the range, weighing 35-90 pounds and measuring 18-26 inches in height. Male dogs are often bigger; however, female dogs would have a powerful, athletic physique. It is different for each dog and might be tough to anticipate!

If we consider statistics without taking gender into account, a mixed dog weighing approximately 60 pounds and measuring around 20 inches in length is perhaps the most typical result.

It is a large and powerful dog that needs a bold, experienced person who is ready to put in the time and effort necessary to teach their pet.

This breed is brave, loyal, aggressive, and afraid of new people. As a result, they make wonderful guard dogs. [1]

The hunting instinct is high in both parent breeds of the cattle dog cross German Shepherd. It may encourage them to pursue smaller creatures such as rabbits, or squirrels, or cats, or other animals. They should be trained with other animals, young kids, and visitors from the time they are puppies.

If trained properly, the German Shepherd Australian cattle dog mix is a terrific house pet who gets along great with older kids. However, it is not suggested to have this breed in families with kids under the age of seven.

Even though Australian cattle dogs are not recognized for someone being noisy, German Shepherds have a habit of howling when they have been kept alone for an extended period of time. The amount of noise produced by a Blue heeler German Shepherd mix dog depends on which parent genetics seem to be more strong. [2]

This breed is not ideal for a new dog parent because of their skeptical behavior of strangers temperament, hunting instinct, clever intellect, and autonomous mentality.

The German Shepherd and Australian cattle dog mix are alert, lively, and athletic dogs. He will require a large garden to exercise in and run to let off energy, so apartments aren’t a good fit for him.

This breed might bark or chew on things when bored.

This breed has a high level of intelligence and can quickly grasp instructions. They can be trained to accomplish anything due to this characteristic. However, they could be stubborn. As a result, Australian cattle dog German Shepherd mix puppies should be taught from the time they are young. Positive thinking and offering reward is the perhaps the most successful way to train them. [3]

Since this Australian German Shepherd dog mix is not an inherently extroverted breed, it requires socialization.

You also need to provide mental stimulation to your pet in order for them to learn and remain out of danger. This mixed breed will not follow your instructions unless socialized and trained.

Start giving your pet basic orders throughout training to avoid confusion or frustration. If you are using negative comments or utilize punishment-based techniques, your pet will become violent. However, reward-based training methods will work great with this breed.

However, if you feel you are not capable of doing the job, you can get the help of a qualified dog trainer. If you’re an inexperienced dog parent, you might want to look into other breeds that are more friendly.

The ACD GSD is a very energetic dog who needs a lot of exercise. This breed is highly energetic that enjoys being active and playing all day. You need to make sure that this breed gets both the physical and mental engagement to stay happy and healthy.

You should certainly be fit and healthy yourself and follow a regular workout regimen. This dog enjoys a wide range of physical exercises. If you love cycling or jogging, the German Shepherd and Australian cattle dog mix is an excellent partner since these canines love running alongside their guardians.

While regular walks are strongly suggested, your pet would need to explore and run about to burn off his boundless energy. [4]

Daily walks twice a day are is required for an Australian cattle dog mixed with German Shepherd.

Playing along with your pet will also help in developing a stronger relationship. Frisbee or tug-of-war games are other good ways to exhaust yourself out and your pet.

Note: GSD and ACD mixed-breed can easily tolerate any climate.

The double coat of the German Shepherd mixed with Australian cattle dog is unique. Because they have received the ACD’s short-length coats, they may not need regular maintenance.

If they have the long-length coat of a GSD, they would require regular maintenance. This mixed-breed sheds a lot of hair and loses its undercoat. [5]

You have to brush this dog every day during the times of high shedding to maintain their hair in great shape.

Although they have delicate skin, you must brush their coat using a bristle brush. Brushing on a regular basis will offer a good massage to their skin and create oil, as well as maintain the fur smooth. It will also maintain a strong relationship between you and your pet. You must only give them a bath when they look extremely dirty. They have dry skin, and bathing them regularly, might harm their sensitive skin.

You also need to clean their teeth once or twice a week using a toothbrush or any other dental product. You should cut their nails to stop them from growing too big and creating problems.

In order to keep it healthy, this mixed-breed dog must be fed twice or thrice a day. You can consult your vet to determine the exact amount of diet to give to your pet depending on its size, age, and amount of exercise.

If your pet is lethargic, he won’t require more diet, but if he is energetic, he will require even more.

For muscular growth and maintenance, a cattle dog German Shepherd mix puppy would require a minimum of 18 % of the proteins in his food. Raw meat is a good source of animal protein for your pet. You may also add omega-3 fatty acids and multivitamins to their food.

The life expectancy of this mixed breed is 11 to 14 years. They are healthy breeds, but there is still a risk that they will acquire medical problems from their parent breeds.

Although not all German shepherd cattle dog mix puppies would have to deal with all of these issues, it’s vital to be aware of them if you’re thinking about bringing this breed to your home.

They may suffer from epilepsy, hip and elbow dysplasia, vision difficulties, eczema, and deafness.

Buy a puppy from a reputable breeder or try to adopt a mature dog to increase your probability of getting a fit and healthy animal.

This mix-breed has bloating issues

The Australian Cattle Dog is clever, energetic, and powerful. They are extremely devoted and possessive of their loved ones. They’re still trained as herding dogs nowadays.

An Australian Cattle Dog excels in intelligence, flexibility, and herding. When it comes to socializing, they prefer to stick to one individual and are less attached to the rest.

Due to their strong bond with their selected human, these dogs are called “Velcro” dogs. They are also known by their names “Blue Heelers” and “Red Heelers“.

The ACD has a high hunting instinct and may attack other small animals like squirrels, rabbits, and cats.

The German Shepherd is a skilled and clever service dog. They are recognized for their bravery and dedication. They are also extremely flexible, succeeding at everything they are taught.

They are well-known for being one of the simplest canine breeds to teach and maintain. They are high-energy canines that need regular exercise and socialization.

Due to their powerful and defensive nature, GSDs make great guard dogs. Their nature is reserved yet not arrogant. They might take a bit longer to make long-lasting relationships, but when they do, these dogs are fiercely devoted. They are very friendly and gentle with their loved ones.

Is Cattle Dog Cross German Shepherd Right For You?

The Australian German shepherd dog requires a skilled guardian who is ready to teach and spends time and energy to train and socialize the pet.

If you live a healthy lifestyle, have got plenty of space in your home, or have previous dog expertise, this mixed breed is a good fit for you.

This dog is ideal for people in need of an active dog to assist with herding or farm tasks. This canine will be suitable for someone who enjoys nature and often hikes, camps, or explore around.

The perfect fit is for houses having older kids who can give leadership. However, this breed is not a good option for the family having little kids.

An Australian cattle dog cross German shepherd is a fantastic dog to have as a pet. Think of a cross between a lively Blue Heeler and a hardworking, laid-back German Shepherd!

This canine is a good choice for you if you live a healthy lifestyle and require a devoted and clever friend.

Rest assured that you get a German Shepherd cattle dog mix puppy from a reputable breeder then he might assist you in ensuring that your pet is fit and lead a healthy life. 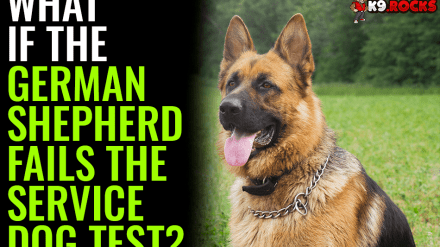 What If The German Shepherd Fails The Service Dog Test?

10 Dog Breeds with the Loudest Barks

Why Is Dog Breeding Bad?